Blog - Latest News
You are here: Home1 / Welcoming a Maine Brewery to National 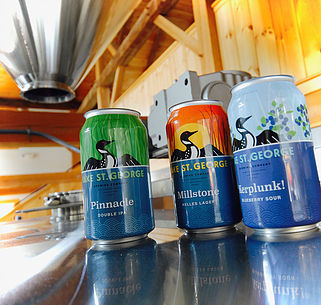 We are excited to now be distributing beers by Lake St. George Brewing Company.

In 1993, Lake St. George Brewing Company opened its doors as the 6th brewery to operate in Maine. Started by Danny McGovern and his partner, Kellon Thames, the beer was brewed in the McGovern’s basement on a 7 bbl system. There was no tasting room, no packaged product and all accounts were draft only.  In between brew days and CIPs Danny would deliver beer along the coast of Maine from Portland to Belfast during a time when most folks had never heard of IPA’s or Oatmeal Stouts. In the 90’s, craft beer held only 2% of the market share, and so a tough choice was made after a few years to decommission the brewery even as the beer was winning awards at the World Beer Festival.

Danny’s Oatmeal Stout
4.9% ABV – Oatmeal, wheat and flaked barley give this beer a luscious mouthfeel and fluffy cream-colored head. Hops and malt are balanced perfectly in this one to create a beer with a satisfying roasty flavor and a slightly dry finish..

Davistown Brown
6% ABV – Malty and sweet with roasted coffee and chocolate notes, this brown is darker and richer than the traditional. It is a recreation of Dirigo Ale, the first beer brewed at the original Lake St. George Brewing in 1993.

An Out-of-this-World Brew from Budweiser
Scroll to top